This blog has reached a watershed moment. Having spent more than six months exploring the first forty-one years of Merton's life, the story at last moves on to Bournemouth. Well done if you've stuck with it so far. It's been heavy going sometimes, and the sketches have often been a little too sketchy for comfort. From this point onwards, Merton's steadily increasing public profile results in a relative glut of material to work with. This makes it much easier to explain his actions and analyse his motives. Nevertheless, this post will deal with what may be the biggest Russell-Cotes mystery of them all: the circumstances surrounding his acquisition of the Bath Hotel in Bournemouth.

One of my earlier posts examined the reasons why Merton moved to the south coast. His autobiography cites a chronic lung condition as the catalyst, but the impending demolition of his Glasgow hotel must surely have been a factor. Merton loved to romanticise, so it's best to tread carefully when reading his account of moving to Bournemouth. Take the following extract from Home and Abroad, for example, which comes immediately after his doctor has told him to head south for the benefit of his health:

We commenced our south coast tour, beginning at Margate and taking each health resort en route until eventually we crossed over from the Isle of Wight via Lymington, to Bournemouth. During our stay I made the acquaintance of Mr Arthur Briant, the owner of the Royal* Bath Hotel. We became very friendly, occasionally driving out together, and otherwise enjoying each other's society. On expressing to him my admiration at what I felt was a unique and idealistic spot, and that acting upon Dr Moore's advice, we had almost decided to take up our residence in Bournemouth, he at once suggested that I should purchase his property, as a first-class investment. [* The hotel only acquired the 'Royal' prefix after Merton took over.]

This paragraph gives the impression that Merton was looking for somewhere to live, not a business opportunity. There is also a sense of serendipity about his arrival in Bournemouth. And because Home and Abroad says nothing about his hotel in Glasgow, let alone its fate, the implication is that he knew nothing about the hospitality trade when he met Arthur Briant. This, of course, was anything but the case. The impending demise of the Glasgow hotel makes it far more likely that the main purpose of the south coast tour was to find a replacement. Merton may even have had prior knowledge of Briant's willingness to sell. Even so, I find it hard to believe that he didn't consider other options.

With that in mind, it's interesting to note that Merton took his family to Douglas on the Isle of Man in September 1875. Local newspapers in tourist towns routinely printed lists of visitors during this period, so it could simply have been a holiday. But could it also be a sign of where fate might have led him to put down his post-Glasgow roots? Interestingly, a Mr & Mrs Cotes of Wavertree - i.e. Merton's brother, Alfred, and his wife - also visited Douglas the following summer. Another holiday, maybe, and yet we know that Alfred contributed financially to his sister's hotel in Edinburgh. Could he have held a stake in Merton's businesses, too? Every little helped when it came to buying the Bath.

A word about timings here. Merton dates his first visit to Bournemouth to April 1875 and claims to have had a letter of introduction to Dr J. Roberts Thomson (1844-1917), an eminent local physician. William Pickford, in his obituary of Merton (see link), also mentions 'early 1875' as the key date, as well as saying that, on that initial visit, Merton 'took a room over a shop that is now the Capital and Counties Bank'. As that bank was taken over by Lloyds, I take this to mean the site of their current branch in Old Christchurch Road.

While I haven't been able to find Merton in any of the Bournemouth visitors' lists for this period, there is no reason to believe that the April 1875 date is incorrect. So what happened between that first meeting with Briant and the eventual purchase of the Bath Hotel in December 1876? Pickford talks about a breakdown in the initial negotiations - the cost of the hotel's parrot being one of the sticking points. Merton's explanation, although broadly similar, is mixed with some celebrity confusion:

In the following autumn I had another attack of bronchitis, and went to the Bridge of Allan to recuperate. One morning we received a telegram from our dear old friend Charles Mathews, who had arrived in Glasgow for a week's engagement at the Theatre Royal. He generally visited us, and on this occasion he wrote begging us to return, as he did not feel at all comfortable without his host and hostess being with him. We therefore returned the following day, and this, I may say, in passing, was the last visit he ever paid us, as his death occurred shortly afterwards. A day or two after our return, the tablemaid brought up my letters, and the first one I opened was from Mr Arthur Briant, from the Caledonian Yacht Club, London. He drew my attention to his promise that he would not dispose of his property without first giving me the refusal of it, and requested me to reply by telegram.

Elsewhere in Home and Abroad, Merton says that he last 'entertained' Charles Mathews (1803-1878) - a well-known comic actor - in November 1875, and that he last saw him in a play called Ici on Parle Francais. However, I can find no record of Mathews performing in Glasgow between March 1875 (when he played at the Theatre Royal) and September 1876 (at The Gaiety), nor can I see that he ever performed in the said play. It's likely, then, that Merton is referring to Mathews' visit to Glasgow in 1876, which fits with the Bath Hotel timeline. Incidentally, his use of the words 'host, 'hostess' and 'entertained' are as close as he gets to acknowledging his hotel career in Glasgow. The Mathews tale is noteworthy for that reason alone.

My guess is that Merton walked away from the first negotiations with Briant to seek other possibilities. The 1875 trip to the Isle of Man is consistent with that. In any event, one of the two men set the ball rolling again many months later, although William Pickford differs from Home and Abroad in saying that it was Merton who got back in touch with Briant, rather than vice versa. Merton portrays Briant as keen to sell, ostensibly because his daughters were about to get married, and he wanted to move to London. Be that as it may, the situation in Glasgow gave Merton far more reason to chivvy things along. Home and Abroad makes it sound like Briant did all the running, which included some helpful reassurance about how easy it would be to run the hotel:

He [Briant] said that he had no knowledge of the business personally, but he had a Mrs. Martin, the lady manageress, who managed and controlled the whole affair without any interference from him at all, except, as he laughingly remarked, that he had his breakfast at 9.30, and afterwards received the cash and took it over to the bank.

This hands-off characterisation may well be true, because Briant was not brought up to the hotel trade. A draper's son, he was born on the Isle of Wight in 1830 and, by the 1860s, was running a riding stables and carriage business in Ventnor High Street. An article in the Hampshire Advertiser from 1862 states that he was also running a hotel from those premises, but this was not his main line of work. He had moved to Christchurch by the time of the 1871 census, when he was earning a living as a coal merchant. His brother, who had left the Isle of Wight a few years earlier, ran a coal, wine and corn business in Commercial Road, Bournemouth - an odd mix of staples and luxury. It later became a specialist wine and spirit merchant, which survived for several decades.

Briant acquired the Bath Hotel in the summer of 1871, but he was an unobtrusive proprietor compared to Merton. He advertised little during his tenure and missed a golden opportunity when Benjamin Disraeli visited the hotel in December 1874 to recover from an attack of gout. Disraeli was then the Prime Minister, so it was well worth shouting about. Mary Martin, Briant's manageress, was listed as the hotel's accountant on the 1871 census, so marketing may not have been her forte. Merton, on the other hand, trumpeted his second-hand knowledge of the Disraeli visit long after the event.

None of this tells us how Merton funded the purchase of the hotel. He was buying a lease, not the freehold, but I don't know what premium he paid for it. Every research avenue has come to a dead end as far as that's concerned. The situation was complicated, that much is clear. Merton had a good track record at the Royal Hanover in Glasgow, and the hotel remained open for almost two years after the move to Bournemouth. I'm guessing that his sisters - including the recently bankrupt Clara - helped to look after things in Scotland. The Glasgow hotel must have generated useful extra cashflow as Merton established himself on the south coast.

There is also Clara's bankruptcy to consider, which I covered in my previous post. If that tells us anything, it's that Merton would have driven a hard bargain with Briant. It also reveals that he treated lending and borrowing as a fact of business life and would have had no qualms about taking out a loan to cover any shortfall. Indeed, his granddaughter, Phyllis Lee-Duncan, believed that 'he had to go to the bank and borrow ... they trusted him.' Although she said this too long after the event to be reliable - it was in the 1990s during a recorded conversation with the curator of the Russell-Cotes museum - it's hard to imagine that Merton could have mustered enough capital without resorting to loans.

The other aspect to all this is the role played by Sir George Meyrick, the Bath Hotel's freeholder. I'll say more about this gentleman in future posts, but the issue here is what he stood to gain from Merton buying the hotel. As one of the town's biggest landowners, Meyrick had benefitted more than most from Bournemouth's increasing popularity as a health resort. The Bath Hotel attracted an upmarket clientele - Disraeli being a prime example - but it had changed little since it opened in 1838. Perhaps Merton convinced Meyrick that an enlarged and improved hotel could be lucrative for them both. That might have encouraged Meyrick to contribute towards the cost of the dramatic extension that started to take shape soon after Merton took over.

There is a lot of guesswork here. I still hope to get to the bottom of it all one day, because I feel sure that the relevant paperwork is still out there somewhere. Whichever way you look at it, Merton pulled off a remarkable feat by securing the funding to buy and extend the hotel. If he had failed, the Russell-Cotes Art Gallery and Museum simply wouldn't exist. Not in Bournemouth, anyway.

By Paul Whittaker No comments:
Email ThisBlogThis!Share to TwitterShare to FacebookShare to Pinterest
Older Posts Home

Click on the image below to see stockists of my book: 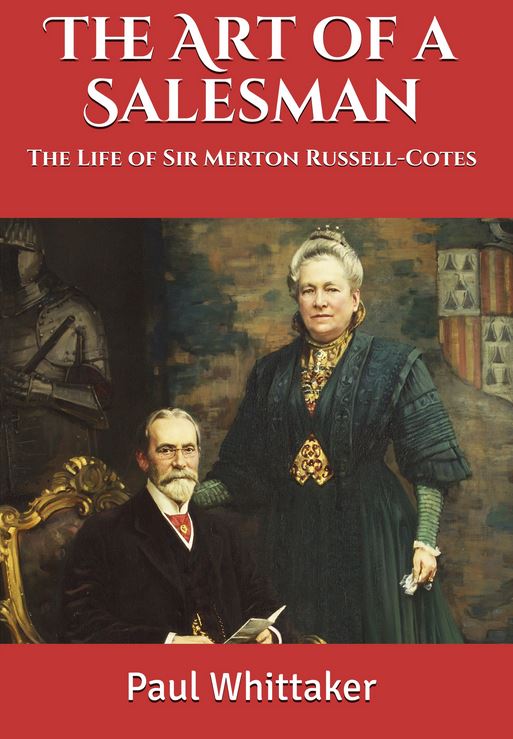